How and why Moroccan drugs are seized by Polisario Front 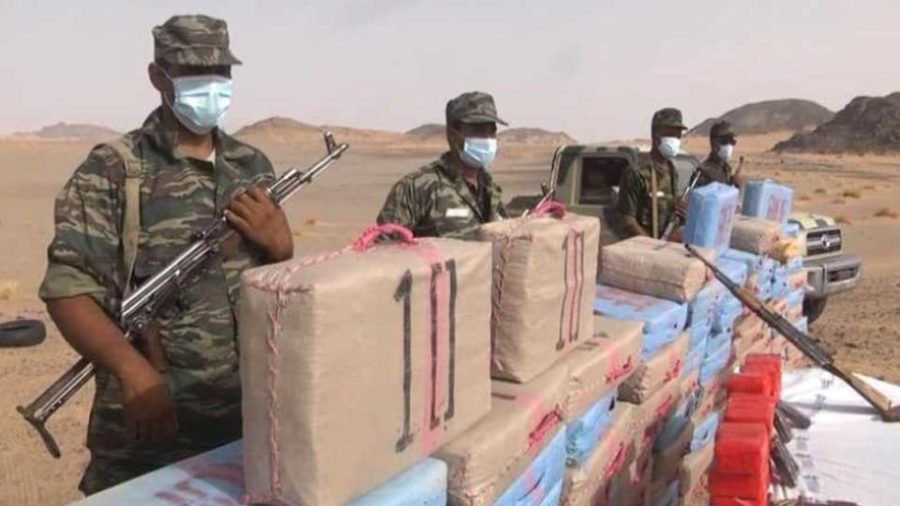 In recent years the Moroccan drug trafficking has increasingly used the route that passes through occupied Western Sahara, the final destination being the Sahel region and the Terrorist groups who are partly financed by drug and arms smuggling.

Since 2015,  more than thirty tons have been apprehended in operations carried out on the route that, crosses the Saharawi territory and goes from the Moroccan separation  wall to the Sahel regions in Mauritania, Mali and Niger.

Last Monday and Tuesday the Sahrawi armed forces seized 3,775 kilos of hashish  in Agüenit, south of the territories liberated by the Polisario and a day later 775 kilos were confiscated in the nearby Dugej area.

Members of the United Nations Mission for the Referendum in Western Sahara (MINURSO) were present as witnesses in the operation of burning the apprehended drug.

The Saharawi government has repeatedly informed the United Nations Security Council about the drug trafficking activity that crosses over from the occupied territories. The last communication to UNSC was last Wednesday, after the seizures of more than four tons of hashish in the two aforementioned operations.

Sidi Omar representative of the Polisario to the UN, holds the Kingdom of Morocco responsible for these operations, which he attributes to its status as the world’s largest producer of cannabis resin, as reflected in the reports of the Office of United Nations against Drugs and Crime.

This is only the tip of the Iceberg told us a Saharawi Human Rights Activist, the occupied territories are flooded with drug trafficking and all this is only possible with the complicity and knowledge of the Moroccan government, he said.

Do you doubt that? So, explain to me how it is possible to enter with thousands of kg’s of hashish into a territory where all circulation is closely watched, where cars have to stop dozens of times even before entering in control posts from the gendarmerie and the police. In the occupied territories there are militaries, police and auxiliary forces, more than 15 per each Saharawi, controlling all our movements. You can see the videos, all roads, all avenues have police cars, the UN contingent is everywhere, although they are completely useless but they are everywhere. To one side we have the Atlantic on the other we have the biggest separation wall in the world with 2720km, manned with over 100 000 Moroccan soldiers, with heavy military equipment, satellites, drones, all the latest technology. How is it possible to cross every day with trucks full of drugs, and other illegal goods? Tell me? They are all in on it. They not only profit directly they also use it as leverage with the EU and US like they do with the illegal migrants, it’s the same strategy.”

Also members of Polisario Front question how  it is possible that the drug traffickers manage to cross the wall, without being detected, by one of the 100,000 Moroccan soldiers equipped with sophisticated radars capable of detecting the passage of a simple animal, and then cross, without jumping through the air, a field of seven million antipersonnel and anti-tank mines that protect the entire perimeter of that wall without the knowledge of the Moroccan military occupation authorities,.

The illicit drug trade is thoroughly entrenched in Morocco with the complicity of the local law enforcement although most of the drugs produced or transported are destined for European markets a big amount of them is destined to finance Terrorist groups based in the Sahel and Sub-Saharan countries.

The main drug exported from Morocco are cannabis derivatives that are produced in northern Morocco. To arrive in occupied Western Sahara they have to cross the whole country undetected which would be impossible without the aid of the law enforcement forces.

Morocco makes a huge propaganda around their “fight against international narcotics trafficking” and receives due to it large sums of funding from the EU and the US for counterterrorism, military and drugs. Morocco is the biggest beneficiary of EU aid in the Mediterranean, having received billions of euros from both the European Neighborhood Instrument and the European Investment Bank between 2014 and 2017.

Once in a while members of authorities implicated in assisting traffickers are tried and punished to show the “hard drug fighting policy of the Moroccan government”.

This strategy has excellent results for Morocco who will be future Co-Chair of the Global Counterterrorism Forum alongside Canada.

Morocco is known for its dangerous links between terrorism and transnational crime, but used it to its own advantage pretending to be very involved in the prevention and fight against these crimes and appeals constantly to a more concerted action among States in the Sahel and the Maghreb in particular, which of course need funding. Without illegal migrants and drug trafficking Morocco would have severe financial and military aid cuts.

This strategy has allowed Morocco to present itself as a reliable ally for Europe, as well as a major player in resolving the crisis of radicalization in north Africa and stopping terrorist plots before they unfold on European soil (especially in Belgium, France, and Spain). This gives the regime leverage in its dealings with the EU, offsetting its dependence on European financial and diplomatic support that are menaced by the illegality of the occupation of Western Sahara.

Morocco’s supposed role in constraining illegal migration and fighting terrorism will continue to make it a valuable ally for the EU and NATO.

So, the Moroccan authorities increase the problem, support the problem and present themselves as the solution for said problem, gaining on both sides. It’s brilliant! But not new”.

Mohamed S., a Saharawi journalist of the occupied territories

Polisario Front has to fight now an added problem that the Moroccan drug trafficking  represents for them and that is a factor of major instability in the region. Polisario army was able to block the entry routes through the northern part of the separation wall but this only made the drug trafficking gangs smuggle the drugs into Saharawi territory going to the southern part of the wall.

The MINURSO contingent is also under possible danger since according to SG António Guterres the threat related to terrorist groups and criminal activities in the region continues to be of great concern due to its unpredictability and unknown level of risk, especially for operations bases located in remote areas east of the wall (the part under Polisario control), where unarmed ground patrols cover great distances throughout the Territory and are easy targets.

We do not share the reading of UNSG António Guterres regarding the security-related risks for MINURSO team sites in the Liberated Territories (east of the berm in UN terminology). So far MINURSO has been one of the most secure, and protected UN operations where no single life-threatening incident has even been reported, especially in the Liberated Territories, thanks to the security provided by the Sahrawi Army units for the UN teams.